83% of patients find relief from neck pain with ACDF surgery.

In some cases, disks are damaged due to injury instead of degeneration. 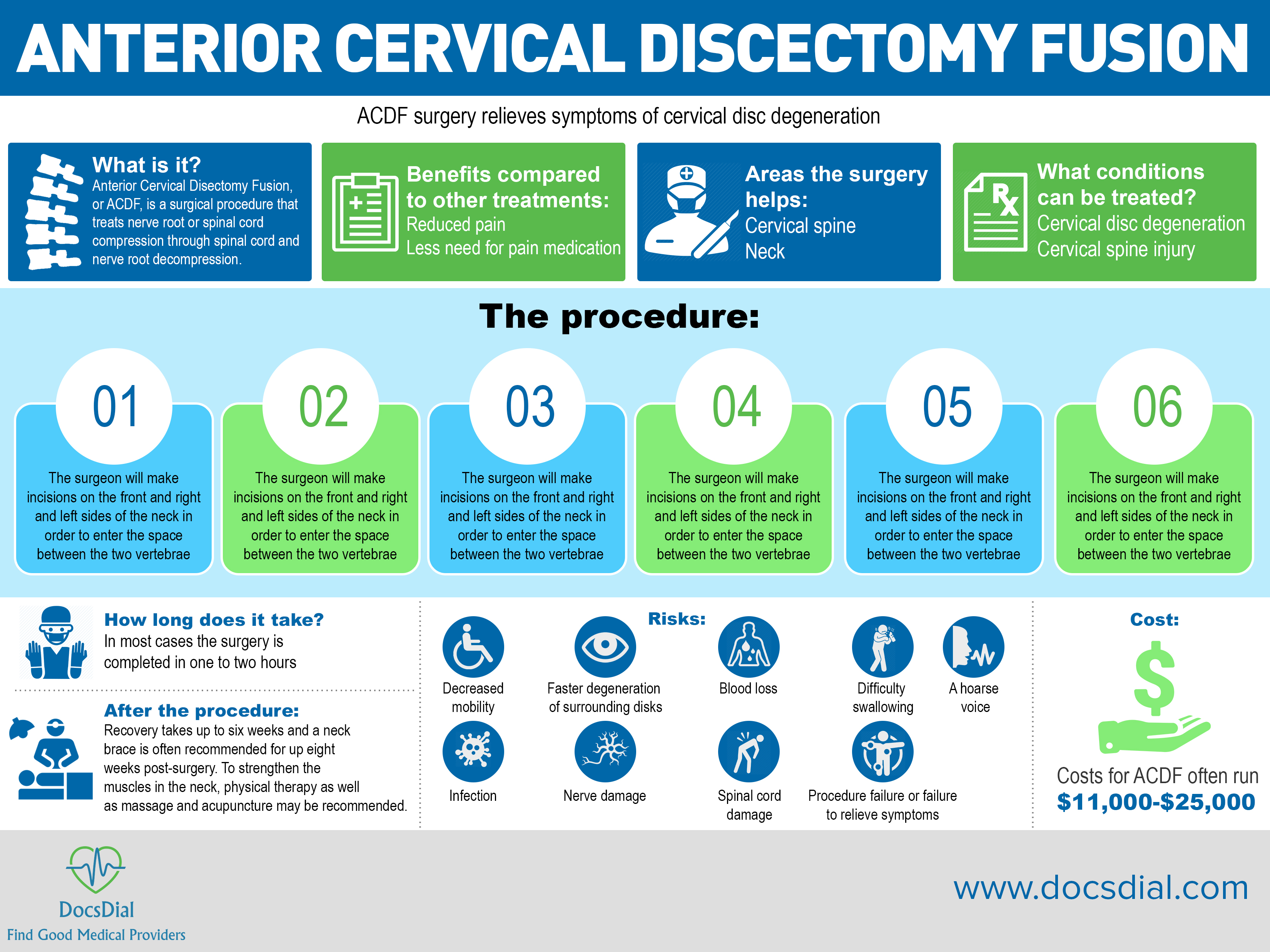 The cervical spine is made up of seven bones or vertebrae stacked one on top of another forming the neck. In between the vertebrae are cushions called disks. These act as shock absorbers so when they deteriorate with age, the neck can become painful and hard to move. Loss of mobility with cervical disk degeneration is common.

Because the upper part of the spinal cord passes through the cervical spine, the vertebrae or cervical disk can press on it when the opening becomes too narrow. Sometimes, the body reacts to a disrupted disk by forming bone spurs, which can also put pressure on the spinal nerves, causing neck pain. Pushing against the spinal nerves leads to pain, numbness and sometimes weakness in the neck and extremities. When nonsurgical treatments do not provide relief, surgery is often recommended.

Anterior Cervical Disectomy Fusion in San Francisco treats nerve root or spinal cord compression through spinal cord and nerve root decompression. The goal is to stabilize the surrounding vertebrae where the disk has deteriorated and eliminate or reduce chronic neck pain in San Francisco patients. In most cases, a nerve root becomes inflamed because the disk has herniated allowing the jelly-like center of the disc to bulge through and put pressure on the nerve root or because the disc has degenerated and the cushion is no longer there to protect it.

ACDF surgery is done to alleviate severe symptoms associated with cervical disk degeneration, which include: neck stiffness, neck pain, headache, pain that travels into the shoulders and arms, weakness in hands, arms, shoulders and legs and numbness in the arms. Those who experience severe arm pain are often the best candidates for San Francisco ACDF surgery.

San Francisco ACDF surgery reduces or eliminates back pain in the cervical spine and neck.

What conditions can be treated?

San Francisco ACDF surgery used to relieve neck pain takes between one and two hours in most cases, form start to finish.

Here’s how a routine procedure goes:

Recovery is gradual and often takes up to six weeks. One to three days of that recovery will be done in the hospital or clinic where Dr. Abbi performed the surgery. Using an endoscopic micro discectomy instead can reduce recovery to just a couple of days. To maintain proper spinal alignment and prevent injury from too much movement, a neck brace is often recommended for up eight weeks post-surgery. To strengthen the muscles in the neck, physical therapy as well as massage and acupuncture may be recommended.

Before surgical intervention, most patients will try a mix of physical therapy and pain medication to alleviate symptoms associated with degenerative disk disease. In some cases, steroid injections will be given in the spine or traction will be done to reduce symptoms. Other surgical methods include cervical total disk replacement surgery (a newer procedure during which an artificial disc is placed in the space between the vertebrae where the old one was removed). Posterior discectomy and lamino-foraminotomy are also surgical options for treating cervical disc degeneration.

When several vertebrae are fused together, a decrease in mobility may be experienced. Patients may be able to feel the difference with only one fusion in some activities that require a lot of neck movement. Most, however, do not experience a significant change in movement and many actually report better movement after surgery. When vertebrae are fused together, motion is eliminated in that part of the spine, which can lead to faster degeneration of surrounding disks and require subsequent surgeries. Other risks include blood loss, which could require the need for a blood transfusion, difficulty swallowing, a hoarse voice, infection, nerve damage, spinal cord damage, procedure failure (occurring in 1 in 50 cases) and failure to relieve symptoms.

After surgery it is important to get up and move as soon as possible to avoid complications from extended bed rest including risk of deep vein thrombosis (blood clots in the deep veins) and bed sores.
Dr. Abbi performs ACDF surgery in San Francisco to relive neck pain, arm pain and numbness or weakness in the neck and extremities caused by a pinched nerve.

Costs for San Francisco ACDF often run $11,000-$25,000. How many discs are treated will affect cost. Insurance will likely cover some or all of the procedure, so check with your provider for an accurate estimate of out of pocket expenses. Don’t forget to factor in aftercare, including physical therapy. 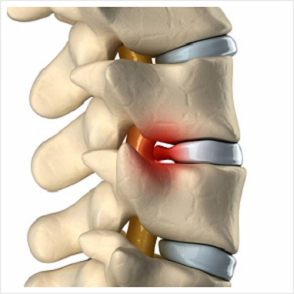 When symptoms of cervical radiculopathy persist or worsen despite nonsurgical treatment, your doctor may recommend surgery. The primary goal of surgery is to relieve your symptoms by decompressing, or relieving pressure on, the compressed nerves in your neck. Other goals of surgery include:

In most cases, surgery for cervical radiculopathy involves removing pieces of bone or soft tissue (such as a herniated disk)—or both. This relieves pressure by creating more space for the nerves to exit the spinal canal.

Come see Dr. Abbi today at one of his office locations

Dr. Gaurav Abbi grew up in the Bay Area and attended UC San Diego for medical school. He trained at UC Davis in Orthopedic surgery and did a fellowship in spine surgery at NYU-Hospital for Joint Disease. From 2012-2016, he worked at Santa Clara Valley Medical Center as the Chief of Spine surgery in the Orthopedic department and as an associate Professor at Stanford.